If you’ve sat down and had a conversation with me about my cancer, then you’ve probably heard me talk about what I’ve found to be the most difficult part for me: Giving up breastfeeding.

Most people assume (correctly) that you can’t breastfeed while undergoing chemotherapy. And while that is mostly true, there are a few exceptions. What many don’t realize, is that the chemo, depending on what kinds you are receiving, only stay in your body for a short period of time. So when I was given the list of different kinds of chemotherapy I would be given, I took to my computer for research, and made some calls to my licensed nurse lactation consultant. Information online is incredibly limited on the subject, but I did read about one success story. One. Attached to the information was an image of a bald woman with a huge smile on her face, nursing her baby. That image gave me hope. The article summarized that she was able to breastfeed her baby for 2 days out of each month while undergoing chemo, and that hope was HUGE for me. Even 2 days of breastfeeding each month would allow a baby to remember how to latch, and by the end of the chemo treatments, in theory you could resume nursing your baby like normal. That was the goal.

Realistically, I’ve known from the day I was told I have this mass (thanks Marvin…) in my chest, that my days of nursing Malcolm were limited. But that didn’t remove the hope I had that there would still be some way around it. I immediately met with the lactation consultant, who then got in touch with the man and doctor who, quite literally, wrote the book on every kind of medication known to end up in breast milk and the lengths of time it takes for those medications to leave your system to be safe for breastfeeding. She let me know that one of my kinds of chemo would be in my system for 7 days and my heart began to bloom with hope. The second kind of chemo would be in my system for 12 days, my hopes grew more. The third kind of chemo lasted even longer, 14 days. But that would still allow me the ability to breastfeed Malcolm for 7 days each month. Then she gave me the news that I had been dreading: The fourth kind of chemotherapy that I would be receiving, Vincristine (a whopping 3ml), had a life of 35 days lingering in breast milk. I was going to be getting my treatments every 21 days, which meant that I would actually be overlapping in my chemo with the Vincristine, never allowing for even one day to a month to latch Malcolm to my breast. Those hopes that were building within me came crashing down. There went the ONE thing that had been going RIGHT for me since my last and final baby had been born. It was just another thing that this cancer would be taking away from me.

I’ve had a love-hate relationship with breastfeeding since having my first baby 7 ½ years ago. I wanted to breastfeed Matthew exclusively, but struggled with my milk supply being extremely low. When he was 3 months old, my milk dried up completely, and we switched him to formula. As a breast-fed and formula-fed baby myself, I am completely aware that formula is a fantastic alternative to breastfeeding, but I was still devastated when I could no longer nurse Matthew. I tried everything to get my milk back, but it just didn’t happen. My first “baby” is now 7 ½ and no worse for having been formula-fed, it was never solely about nutrition, it was about the bonding aspect of feeding him.

By the time my next baby came around, I was DETERMINED that I would be able to breastfeed him for longer than 3 months. I did all of the research on diets that increase your milk supply, things to avoid, and even purchased lactation supplement cookies that everyone swore by. I set a goal to make it to 6 months exclusively breastfeeding, and then when I reached that goal, I set a new one, always increasing my goals by 3 months. I made it to 19 months exclusively breastfeeding Hunter, and allowed him to self-ween when HE was ready, not when my body forced it upon us. I absolutely loved nursing him that entire time and I was incredibly proud of my body for holding up its end of the bargain. I knew without a doubt that I wanted to breastfeed my next (and final) baby as well. Fast-forward to my most recent pregnancy, and the desire to be able to nurse my last baby was as strong as ever. I made sure to prepare the same way I did before having Hunter, because it seemed to work out well enough last time. But then Malcolm arrived and instead of being able to breastfeed him immediately like I did Matthew and Hunter, he had to spend a week in the NICU and be fed via a tube. I was so nervous that he wouldn’t latch, but low and behold, when I was finally able to attempt to nurse him, he latched right away! The amount of relief and joy I felt in indescribable, but it was short-lived. Within a few days they discovered the mass in my chest, and it was a matter of weeks later that I was informed that I would not be able to breastfeed Malcolm once I began chemotherapy.

Now, you’ve read my backstory; you know that I have no issues with the nutrition-side of formula feeding. Each time I’ve had the discussion with people about how I’m devastated that I cannot breastfeed Malcolm because of the chemotherapy medications I am on, I get the same generic response with something along the lines of, “A fed baby is a happy baby.” I know this. But for me it’s not about the nutrition, it’s about the bond I feel when I get to breastfeed my babies. This was my last chance to breastfeed for the rest of my life, and I was looking forward to nursing Malcolm more than anything. And cancer is trying to take that away too. Well, I’ll be damned if I’m going to sit back and let it happen without exhausting every other option left to me. So I’ve decided to continue pumping my breast milk every 3 hours, day-in and day-out, and pour it down the drain. It is exhausting and annoying having to set alarms, having to tote my breast pump with me everywhere I go, to sit in my chemo chair throughout my 8+ hours of treatment in a room filled with people and still be pumping. Having to stop everything no matter where I am or what I’m doing to attach the tubes and sit for 10-15 minutes at a time watching as that wasted milk drips down into the bottles that I will then be pouring down the drain. Anyone who ever said that there’s “no use crying over spilled milk” never breastfed. Every single drop of breast milk is precious; it’s liquid gold. It goes against every fiber of my being to pour 6-10 ounces of that precious milk down the drain. But I do it for my baby, and I’m doing it for MYSELF.

Now, for those of you who are mothers or are familiar with babies and breastfeeding vs bottle-feeding, you may be asking yourself why I am continuing to pump my milk to keep up my supply if I don’t have any issues with formula. Because babies who go 5+ months exclusively on a bottle are not going to know what to do with a breast if you attempt to give it to them after even a month or two without latching. So what would be the point for me to keep pumping throughout all of this? Again, I remind you that the nutrition-side of things is NOT why I am doing this. (Though I certainly prefer giving Malcolm breast milk over formula, I am 100% on board with exclusively formula-feeding.) The fact of the matter is that I am keeping up my supply so that I can resume actually latching and breastfeeding Malcolm at the end of this retched chemotherapy regiment. But how, you ask?

On that note, I’ve decided to share a VERY private part of my cancer journey thus far. I had intended to keep this to myself until the conclusion of my chemotherapy and until I had a “success” story to share about making it through all of this and STILL BEING ABLE TO BREASTFEED MY SON. But this blog isn’t about sharing the aftermath alone; it’s about the journey itself. And sometimes that includes success and sometimes it includes failures. I don’t know whether I will be successful in this venture or not. But the journey itself deserves to be shared. Nine days after beginning chemotherapy, an amazing friend of mine, who happens to have a son born about a week after Malcolm, offered to breastfeed my son once a day, for two days out of the week. I know how bizarre that sounds in this day and age. “Wet nurses” aren’t typically a thing that are advertised much these days, but that is essentially what this amazing woman is doing for my son. It allows Malcolm to drink from a bottle most of the time, but he won’t have forgotten how to latch to a breast when I am able to finally breastfeed him again. It is an amazing gift that she has given both my son and myself, and I’ll never be able to repay her for it. Additionally, she pumps her milk and donates it to Malcolm as well, so he is receiving both breast milk still, along with supplementing with formula. 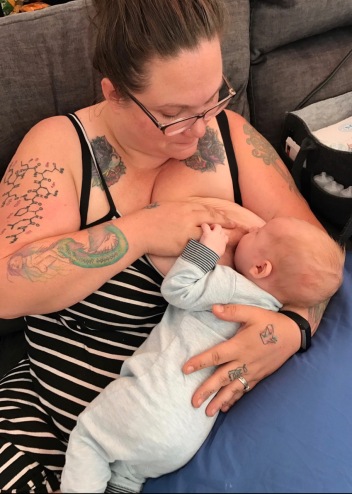 I hope it all works out the way that I have been praying that it will and that I will in fact be able to resume exclusively breastfeeding Malcolm again come February 2019, but if it doesn’t work out, I know it won’t be for lack of trying. Again, this is a very personal part of my cancer journey to share. I know it may rub some people the wrong way, and quite honestly I had very mixed feelings about whether I would even be capable of allowing another woman to bring my baby to her breast when I couldn’t. I thought I would have to look away, that I would cry, that it would be devastating to witness. But I was wrong. I did tear-up a bit, but they were tears of relief when he latched, because after over a week without latching to a breast, I was terrified that he wouldn’t. I was so overjoyed when he did, that I asked my dear friend if I could take a picture of such an incredible moment and she is allowing me to share it with all of you. So this blog post will include photos of both my last day breastfeeding Malcolm the day before I began chemotherapy, and a photo of Bec breastfeeding Malcolm for the first time. Please pray that it all works out for us in the end, and this will all have been worth it. This is something incredibly precious to me, and I really don’t want cancer to take these final moments of the breastfeeding bond I get to have with my final baby away from me. 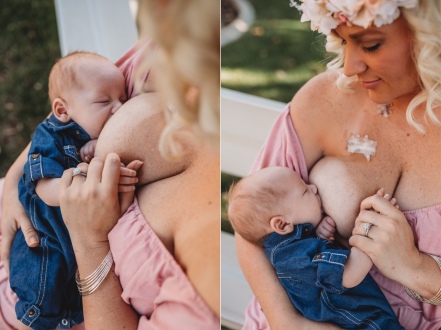 View all posts by faithtrustandnikkidust

5 thoughts on “The Toughest Part So Far For Me…”